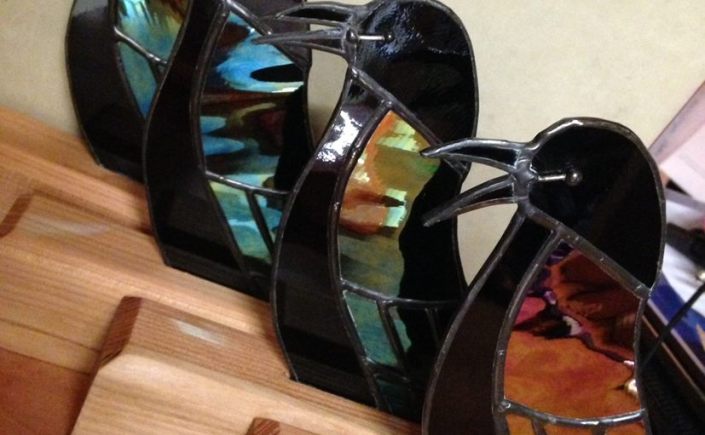 2017 marks the seventh year to recognize Jasper artists for what they give to community. Usually nominations are recieved and a small group of people who have the daunting task of deciding who to give the award too…this year the decision to award was done by those in attendance at the end of the event…a daunting task because out of 18 nominees…only six were awarded.  In music, art, theatre, writing, photography and a patron.

Strategists tell us that in Canada .5% of the labour force are artists. While we have no census in Jasper of the working artists we know that there are more than the statistical 16 for our population. We are truly rich in arts & cultural talents. Which would explain why since 2011 we have recognized over 40 artists for their contribution to Jasper arts&culture.

THESE were the 2017 nominees in no specific order:

Jill Seaton is a woman who had decided early on in her life that the pen was the only weapon she needed. For the last 25 years she has been quoted in a myriad of publications from CBC to various Canadian newspapers and periodicals. Her topics give voice to the denizens of Jasper – woodland, grizzly, wolf to montane Eco-regions like Whistler Creek. Jill also seeks another way to bring immediacy to her vision of a wild and original Jasper to the world – photography. From closely guarded haunts she captures ravens as they hatch, grizzly mother and cubs feasting on carrion or moose and their young. Jill understands and embodies, in both her writing and photography, the necessity of Jasper’s spirit.

Sandy Robinson is a true Jasper icon. He has lived his 80+ years in Jasper and his love of community and his mountain home is evident in both his art and his storytelling. He is now retired and painting fulltime. He is a self taught artist who has attended the Banff School of Fine Arts and various workshops with renowned artists such as Harold Demont Olsen and Brian Atyeo. It would be hard to live anywhere for 80 years without having a few stories to tell. Sandy is an avid historian with a deep appreciation for Canadian history. His remembrances of a Jasper where movie stars and dignitaries once visited make for great storytelling. 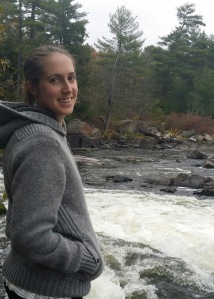 Susan Millar may well the opposite of Sandy in longevity having spent much less time here. But the impact she had and the professionalism she brought to 2017’s theatre production Cariboo Magi was a huge contributing factor to its success. We all know the transietn nature of Jasper – this is but one example of the amazing resource that can be found as people merge with the arts community. Susan found the ART FOR LUNCH program and was soon entrenched in organizing stage movement and props for the annual Christmas production. She has since moved back to her Parks position in Ottawa, married her best friend last weekend and we hope we will see her in Jasper again soon.

Oonagh Naillian is a natural born actor. Enthusiastic, open to ideas, up for any challenge…from joining a hockey team to joining a theatre troupe to taking the mountains by bike to being a member of the community team for Habitat. Her energy is infectious, her sense of humour is unparalleled, her accent a treasure. She may even rival Sandy for storytelling as her Irish roots leave no story unturned. But it is her theatre skills we recognize her tonight. From Monty Python’s argumentative owner of ‘Eric the half a bee’ to Cariboo Magi’s pregnant ‘Marta the child dance hall protegee’…Oonagh takes on persona with confidence and verve befitting the title thespian. 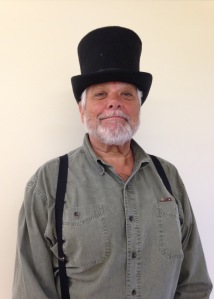 What can we say about Klem? This week you might find him driving tourists around on motorcycles with sidecars. Often you hear Klem before you see him – and not just on a motorbike. His rich deep tone has made him perfect for the role of Santa in singing telegrams or as the ghost of Christmas Present in the Christmas Carol or as a cheese merchant in Monty Python’s Cheese Shop. His is one of the first to call in when rumours start that a production is in the making, to see how he can be involved. His character lends perfectly to that of acting…thats what we can say about Klem!

Grant Carson arrived in the cultural building within mere hours after arriving in Jasper. He had found a new home here and within the week was teaching guitar. Grant is focused & purposeful in the work that he does with his guitar students. You could say that his presence on Jasper stages has added a professionalism that we all benefit from. Knowledgeable in his artform, gentle in his presentations – he was quickly captured be the talent seekers at Parks Canada to bring life the their Whistler stage. Grant is often giving his talents to events and gatherings – definitely one of the .5% of working artists in Jasper.

Stephen Nelson is one of the artists from the past 40 recipients mentioned above. He was recognized last year for his writing. This year he was nominated for his music. Stephen can be found anywhere from the Legion jam to the Canada Day stage to busking on Jasper streets. Where he has a complete range of music that allows him to present solo, he also partners with other musicians ranging from multiple piece bands to duets. You may have seen him at open mic nights at the SnowDome where he slips effortlessly between writer and musician.

Sarah Budd was nominated by her peers at the Artists Guild where she openly shares her passion for art and art history. Since arriving in Jasper she has found her way to volunteering on the guild executive where she brings new perspectives to the board. She also enhances JAG programming with interpretive talks on some of her favourite art history movements like Expressionism and Impressionism. She has always believed in the power of art – just recently beginning to paint works inspired by the park. 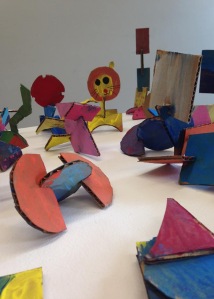 Vanessa Martin (terribly elusive) – or as her students call her – Madame Vanessa was immediate in her desire to share art with the Jasper community when she heard Jasper was getting a cultural centre. Her classes are truly something to behold, from the design of the classroom to the presentation of materials and inclusion of all kinds of mediums…from clay to live portraiture to painting. Even before she could setup at the new building she ran a season at a temporary location to keep the passion for the arts alive in her students. The time and effort she puts into the annual ‘exposition’ for her students to showcase their semester of work has resulted in community art gatherings that many now anticipate annually.

Tara Erickson also found herself drawn to the new cultural spaces building. Being an avid creative and lover of children she quickly found a niche, an opportunity to share her art with children. Mornings became more exciting as she found ways to engage the parents and the children in a unique offering of handson imaginative musical or science based play. She built a cupboard of tools and toys that any child under 100 would be thrilled to venture into. She built a program that took on a life of its own, one that is now integrated into potential arts programming at the cultural centre. 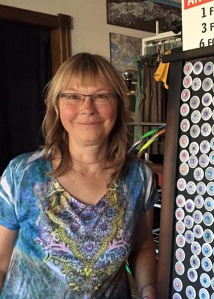 Susan Szathmary has a history of graphic design and painting and music. She has shared her art with the community of Jasper for over 25 years. Her enthusiasm for her newest passion – the art of zen tangling – also brought her to the cultural centre as she had something to share. Zen tangling, for those who are unfamiliar with it, is the art of creating images by using structured patterns. Not your typical Jasper imagery. But one that builds focus and as with any focus it creates a sense of wellbeing. To that end it is very much a Jasper medium. Susan has curated an exhibition of over 100 pieces from across Canada that is currently on display in Jasper at the Habitat for the Arts until October 12. 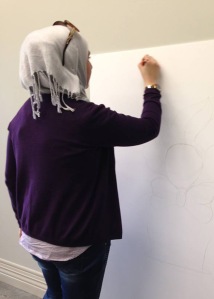 Rola Al Dakhil came to the cultural centre wanting to give back to the community that had opened its heart to her family last year. Here was an opportunity for the arts to truly shine as her programming bridged not only her creativity  with her students, but it gave the opportunity to remove a language barrier, as only the arts can. Her approach to workshops with youth allowed for a cultural connection and exchange that was more than an art class.

David Hatto came to the cultural centre looking to share his Monday afternoons with anyone who would like to paint. An avid hiker and local (now retired) business man is what most of us know about David. What you may not know is that his regular Monday afternoons became a gathering around easels and paintboxes, that bridged seniors with summer staff, where he shared what he loves about colour and design. 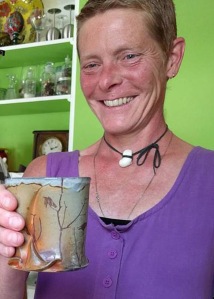 Paulette Dube is a storyteller by design, and was also one of the previous 40, having won a Raven About the Arts Award for writing. Her photography – like her writing captures a raw simplicity – showing us what we all see but often miss. A fellow photographer writes “If the eyes be a window to the soul, and a picture is worth a thousand words – then wordsmith become photographer speaks volumes sans a single syllable. The lens has become an extension of Paulette’s unique view, commonplace elevated to art as framed by poet artist and bard.” (D Baker)

David Baker captures life in moving pictures. Since first turning his focus to the people and places in the community of Jasper he has allowed people to tell their own stories in his documentary style of storytelling. From community dinners to business requests to the wilderness around us…his camera is his tool of choice for giving and sharing his artform. His passion for the medium has resulted in camps and workshops over the years as he attempts to form the next generation of digital storytellers.

Matricia Brown has given her expertise and shared her talents with every possible event and organization in Jasper. She supports many events by giving or by attending, a true patron who may not be here tonight as she is sharing her art elsewhere tonight!

Marianne Garrah has been a constant figure in Jasper’s arts & cultural scene for over 30 years. Her time is spent plotting and creating ways to make that scene bigger and better every year. She is here tonight, no doubt plotting something more.

Charlie Finley can usually be found in the background of any cultural gathering. He’s a doer, he assists in so many ways at events…setting up, cleaning up, watching for ways to make things run as well as they can. Seeing him in your audience usually means the evening is going to go smoothly.

THOSE were the Nominees.  At the end of the evening…the ballots were filled in (it is election year!) and these people are the 2017 Mayors Night for Raven’ About the Arts recipients:

These lovely glassworks created by Raymond Blanchette Dube are now in their new homes.

CONGRATULATIONS TO ALL…See you in 2018!

'Art is Everywhere, Culture is Everything'